Today, I was in the vicinity of the Rothko Chapel in Houston, so I arranged for some time to walk over and spend time there. My last visit was five years ago, after I had heard a piece on NPR about the 40th anniversary of the Chapel’s dedication. I wrote a longer piece about the experience, but for my blog at the time I only posted a short entry. I guess I didn’t feel confident enough to trust my observations of such a celebrated space, and one with which I had such a long association.

I reread the longer piece tonight and, after this new visit, realize the truth in my observations from five years ago. The exterior photos are from today (interior photos are prohibited), note the Broken Obelisk is currently offsite, undergoing repairs. But here is what I wrote after the previous visit, in 2011, with only a few edits:

The impetus behind the Rothko Chapel is particularly intriguing. In the 1960’s, John and Dominique de Menhil envisioned a place of serenity that welcomed people of all faiths. Those times were anything but serene. I was a young boy then and I recall those tumultuous times, filled with news of riots, racial strife, war and unrest.

A trip to Houston recently brought me to the Rothko Chapel for the first time in more than thirty-five years. My wife and I had seen several of Mark Rothko's paintings in the National Gallery this summer. A display of photos from the Rothko Chapel were part of the exhibit, and so we promised ourselves we'd go to the building next time we were in Houston. 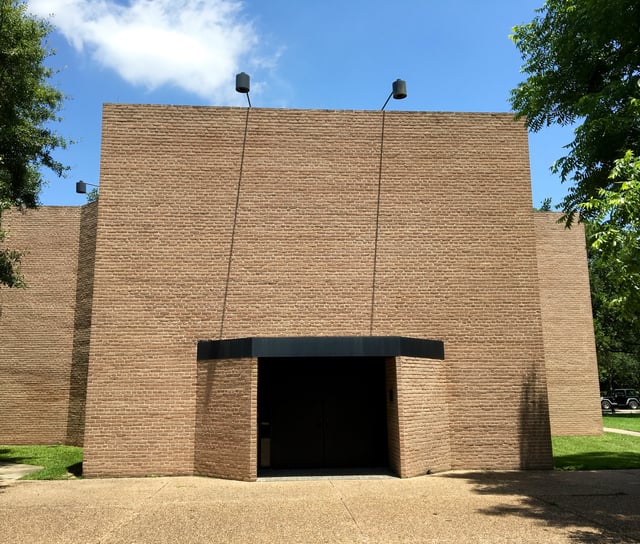 My memories of visiting the space as a young teenager were quite mixed. I remember being very impressed with the overall site. I had ridden my bike to the University of St. Thomas campus and found the chapel on an overcast day. The family had driven past the place a number of times, but this was a chance to visit on my own.

The Broken Obelisk sculpture seemed to float in the reflecting pool and made a strong impression. However, I vaguely recall the exterior of the Chapel. I remembered a dull brick wall, but not much else. The interior was underwhelming. I stood in the middle of the grey space and I tried concentrating on the black canvases. Someone had said you could see Dr. Martin Luther King jumping out at you if you looked hard enough. I know I looked pretty hard, and there certainly was no jumping Dr. King. I got back on the bike and I puzzled over the meaning of such a celebrated place. 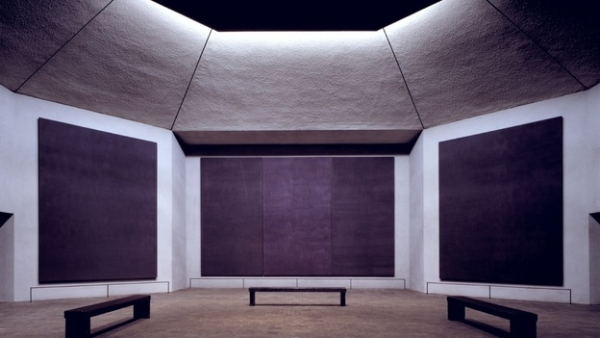 This recent visit, I really expected something much different. I'm a mature architect now. With a vigorous practice, I've been involved with literally hundreds of churches and worship spaces. Thanks to my wife, I've developed an appreciation for abstract art.

Maybe the middle of Spring Break isn't the best time to make a pilgrimage of this kind. Steady clusters of people were coming and going, but the overall site never felt crowded. In fact, the site was even better than I remembered it. The Broken Obelisk sculpture still beaconed to me from the end of the reflecting pool. I noticed a small, but telling detail. A shallow shelf was around the pool's edge. The design literally asked a visitor to wade in the water. And before we knew it, some of the visitors did!

But the inside was once again underwhelming. My wife and I picked our way through a crowd to a free spot on one of the stark wooden benches. There was a respectful hush from the mostly college-age visitors. Several sat in meditative poses on the overstuffed kneeling pillows placed strategically in front of the paintings.

It took me a while to collect my feelings, but I found I was resentful of my fellow visitors. I thought about this and realized what it was telling me. The space is so bare, so stark, so simple, that as soon as it is filled, it isn't the same place. Our focus kept shifting to the crowds of people and away from the art and the building. 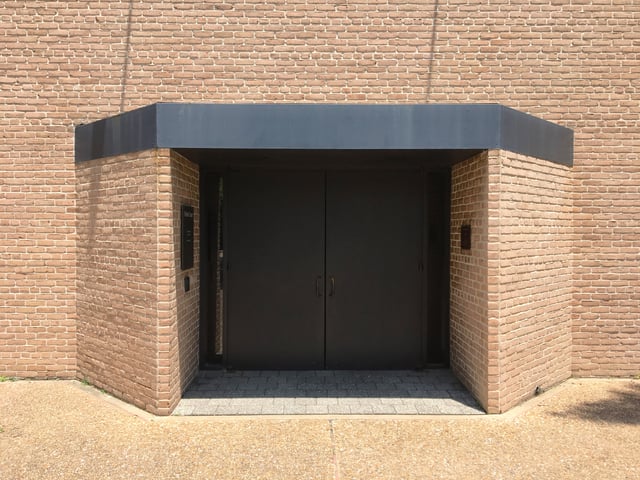 I think that the genius of the Rothko Chapel can be understood as a private experience. At the scale of a painting or a sculpture, we may encounter art in a transforming way, usually as an individual experience. This building functions more completely as a work of art, art that was conceived of at the scale of an entire building. Reviewing some terrific research by art historian Pamela Smart, the inspiration for the Chapel has direct connections to the early art influences on the de Menhil's in their younger days, and the long tradition of art patronage in the Catholic Church.

More as a revelation than a criticism, I have come to understand that the Rothko Chapel is at its core a private chapel. It was initiated and built for one family to further their concept of a spiritual space. That this family has chosen to bequest their creation to all visitors is a wonderful and beautiful gift. I can imagine my wife and I alone in the space, just like John and Dominique de Menhil, simply overwhelmed as we take in Mark Rothko's moving canvases. So next time, we'll go when we're less likely to have lots of tourists. 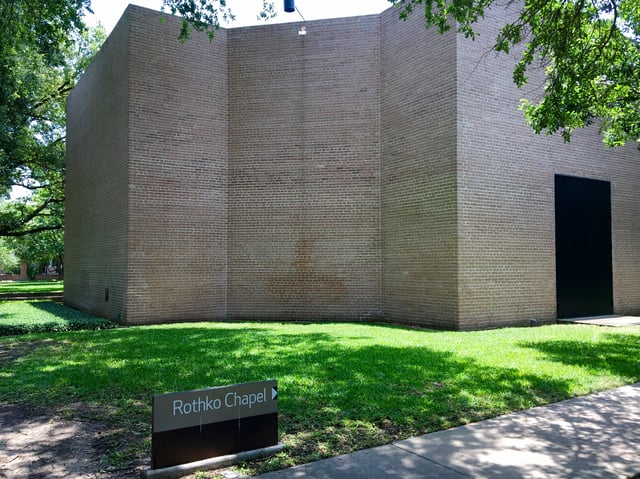 Though not everyone entering this remarkable space, with our without other visitors, may be prepared to absorb the experience. Shortly before we left, an older couple came through the door. They both stopped and look around quizzically. The husband leaned over and asked his wife: "Where is the cross?"