Some landmark churches have been adapting and adjusting to new uses for decades. The Church of the Holy Communion in the Flatiron District is so important, in 1966, it was added New York City’s landmark registry within the first year of the Landmarks Preservation Commission’s existence. But ten years later, it was no longer place of worship.

The former Holy Communion Church as the Limelight Marketplace in 2010 (Wikimedia, Beyond My Ken).

The church’s history began in the 1840’s with a new congregation that dedicated what at the time was a groundbreaking structure 1846. Architect Richard Upjohn’s design was inspired by medieval English architecture. For aesthetic and theological reasons, he integrated the look of the rural parish church into the modern American landscape. This early Gothic design would have e 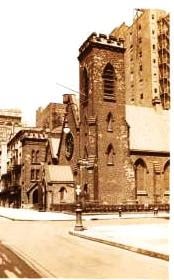 normous influence on later ecclesiastical architecture. This also was the first example of an asymmetrically placed tower, a move that enhanced the picturesque qualities of what was would soon become an urban church.

The Holy Communion congregation lasted almost 130 years. With dwindling membership, it merged with another group in 1975 and leased the historic edifice to a non-profit that used the space for meetings, lectures and offices. In 1979, the group moved out, prompting the congregation to sell the church to a drug rehabilitation program. After several years of that use, the church was sold to the celebrated night club entrepreneur Peter Gatien. His idea was to create a hip, high-end nightclub in the space, and so the building became the Limelight club in 1983.

In its heyday, the Limelight was among the trendiest venues in New York. Its luster faded over the years but the club lasted until 2007. The church’s next life was as an exclusive shopping mail. The Limelight Marketplace retail concept was short lived and in 2014, the current use, David Barton Gym, moved in.

Many thanks to Brad Bloom, the publisher of Faith and Fitness Magazine for alerting me to this unique space. His recent feature on the David Barton Gym points to the opportunities for merging a place to for workouts with a place for spirituality and worship. That’s not exactly the theme in the David Barton Gym, however. The operation takes a tongue-in-cheek attitude to the ecclesiastical history of their new home, with workout sessions titled, “Muscle Mass, Core Communion, and Diving Abs and Salvation.” The exterior retains its historic integrity, and on the inside, the church details add a level of sophistication, if not actual spirituality, to the routine workout.