The University of Texas this Monday dedicated a long overdue memorial for the victims of the 1966 UT Tower mass shooting. I wrote about this several days ago. Seventeen names were carefully researched and etched into a solid piece of locally quarried granite. Unfortunately, a similar amount of research didn’t follow for the Latin inscription. In today’s Austin American Statesman, several Classics professors noted a significant error. 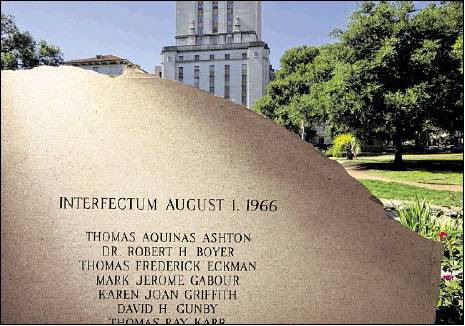 Apparently, the term, “Interfectum” should not have been used to introduce the list of names. According to the experts, the term is a neuter and singular form of a word indicating that something was killed. Essentially the label says, “something that has been killed.” A more appropriate term should indicate those being honored are people. Even the use of the word indicating a killing was suspect. As one scholar noted, “The Latin phrase most commonly used in such commemorations is ‘In memoriam.’”

Of course many asked how this mistake could happen. The takeaway for anyone involved in planning or building should be, “double-check the details!” For many years, I had an artful plaque next to my desk. This ceramic piece was produced for the dedication of one of our projects. The text read: “St. Francis-by-the-Sea Episcopal Chruch.” We check many texts, details, and specifications all day long. When it comes to words that will be permanent, the lesson is you can’t check often enough!