Who Owns A Church?  Neighbors May Have A Say

When churches plan a major addition or a new building, they may easily overlook one key group with strong feelings about any changes - their neighbors! It’s easy to forget that churches and other religious buildings are often considered community landmarks. We strongly advise our clients to engage with their neighbors as a crucial part of the development process. Surprisingly, many churches completely disregard surrounding residents and property owners, thereby running the risk of serious acrimony that may delay, complicate, or even stop a church building program.

An excellent illustration of how powerfully a neighborhood can feel ownership of a church took place this week. The real estate website, New York YIMBY, reports that efforts to convert an empty church building to condos were finally killed due to opposition from the local community. Ironically, the First Church of Christ, Scientist congregation had sold the building to another church, and that church had also moved on. Even New York’s Landmarks Preservation Commission had approved the project. The proposed conversion, designed by Gerner Kronick + Valcarcel Architects, was sensitively done on the outside.  It would have been virtually indistinguishable from the original church façade. 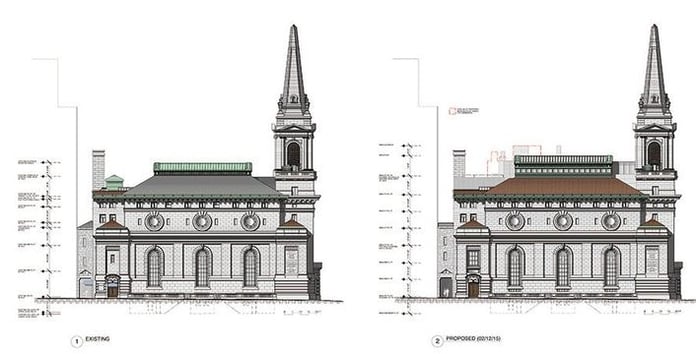 The only concerted interest in keeping the structure intact came from the neighbors. They came out in force at several hearings for the variances needed to complete the project. The Board of Standards and Approvals on Thursday rejected a last ditch effort by the developers and effectively killed the project.

What do the neighbors want for the old structure? Well, many who testified were pretty clear their preference would be to keep the building as a church. The other alternative mentioned was a community center or meeting place. Now New York is not known for being overly sentimental about old, unused buildings. Many well-regarded structures have met the wrecking ball when economics outweigh sentiment. This building sits on some incredibly valuable real estate facing Central Park. So if you want to gauge the sentiment of the neighborhood for this church, I’d say it’s off the charts!